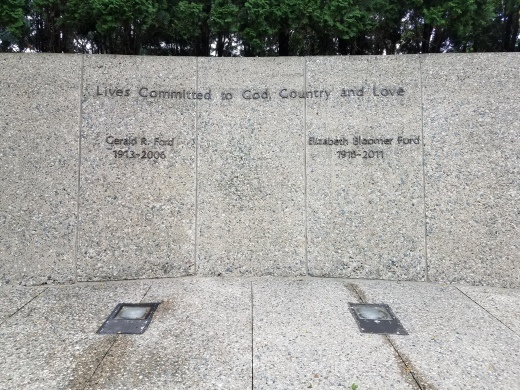 My summer road trip has been disappointing in the lack of any new ancestral graves and I’ve barely made any progress on my genealogy so I thought I’d go for an easy win.

I’ve been collecting Dead Presidents since my youth and Gerald Ford is my 35th of the 39. He’s also my 31st Dead Vice President of the 42. (There are 14 men who have been both President, Vice President and Dead.)

His presidential museum is located in beautiful downtown Grand Rapids, Michigan, on the banks of the Grand River. They wanted $10 to tour the museum itself but the grave was just north of the building and free so I thought I’d pay my respects then get back on the road. But it was such a relaxing space, the modern architecture was appealing and while sitting on a park bench in the shade posting to Instagram, I changed my mind and walked inside.

The museum is nicely done with lots of artifacts from his and his wife Betty’s life, including a full scale replica of the Oval Office which was interesting if only to provide context to all the photos I’ve seen over the years. It’s big but not that big for an office.

I fully expected the local hero worship and rose-colored glasses of hindsight but since I can remember the Ford administration, it was easy, and occasionally amusing, to detect the overly generous interpretations of events and actions during his presidency. 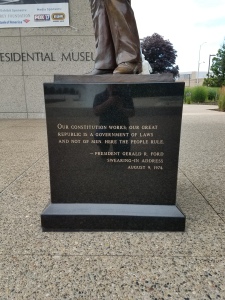 I wonder how differently history would have unfolded if he hadn’t pardoned Nixon just a month into his term. At the time, as a preteen Quaker boy just learning about national politics, I thought it a reasonable decision. I was willing to forgive since no future president would risk similar ignominy by committing crimes while in office, right?

If President Ford and our “Government of Laws and not of Men” had held former President Nixon responsible for his crimes, would we have sold arms to Iran to fund the Contras in Nicaragua? Would we have gotten lied into a war in Iraq?

Would Donald Trump be just another reality TV star today?

Bartholomew Barker is one of the organizers of Living Poetry, a collection of poets and poetry lovers in the Triangle region of North Carolina. Born and raised in Ohio, studied in Chicago, he worked in Connecticut for nearly twenty years before moving to Hillsborough where he makes money as a computer programmer to fund his poetry habit.
View all posts by Bartholomew Barker →
This entry was posted in Dead Presidents and tagged gerald ford, grave, president, vice president. Bookmark the permalink.