I took a little boat ride on the Thames to the Royal Observatory Greenwich and wandered into the Eastern Hemisphere.

My Oyster Card, which is what I’ve been using to ride the Underground all over London, also covers their river services. They actually run boats along the Thames as standard public transport here. I was enjoying myself until a school’s worth of kids showed up on a field trip and pretty much took over the ship. Fortunately for me they were only going to the Tower of London so I didn’t have to deal with the noise for too long. I know they were going to the Tower because I heard multiple teachers and/or chaperones threaten the most boisterous with not going to the Tower. I think that’s irony. 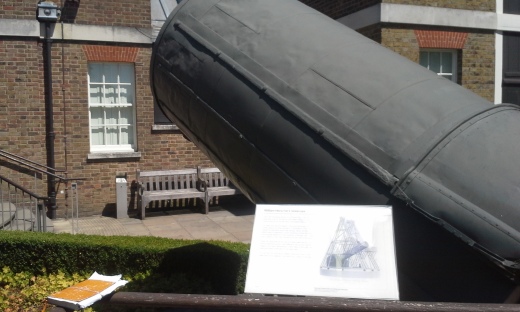 The highlight of the observatory for me was seeing the last surviving section of the Great Forty-Foot telescope built by William Herschel in the 1780s. This device allowed him to be the first human to see Saturn’s moons Enceladus and Mimas. I’m a big fan of Herschel’s as he’s also the first human to notice the planet Uranus and he did it from his backyard in Bath, England with a telescope he made himself. 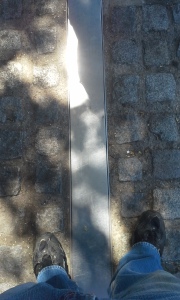 Obligatory selfie with my feet in different hemispheres.

The most popular part of the Royal Observatory’s ground is the Prime Meridian where we start counting longitude. I didn’t realize that it had migrated slightly over the years as the Royal Astronomers built better equipment to calculate stellar positions which was half the problem for determining a ship’s longitude at sea. The other half was having an accurate timepiece in the era of pendulum driven clocks which was also a major exhibit at the observatory. The Prime Meridian has actually moved a little further east since we’re mostly using GPS these days.

I took the train back to London and traveled under the Thames a couple of times along the way, a satisfying coda to the excursion.

Bartholomew Barker is one of the organizers of Living Poetry, a collection of poets and poetry lovers in the Triangle region of North Carolina. Born and raised in Ohio, studied in Chicago, he worked in Connecticut for nearly twenty years before moving to Hillsborough where he makes money as a computer programmer to fund his poetry habit.
View all posts by Bartholomew Barker →
This entry was posted in London 2018 and tagged astronomy, travel. Bookmark the permalink.

5 Responses to The Royal Observatory