The research has been difficult this trip. I think I’ve read all the surviving records and found all the marked graves of my ancestors in Ohio and Indiana. One of the few new finds from this trip is the newspaper clipping from the Muncie Daily Herald of 29 April 1890 about the death of my great great great great grandfather Solomon Parsons. 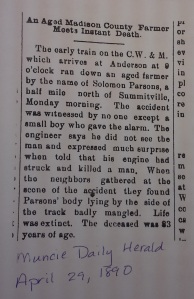 The early train on the C. W. & M. which arrives at Anderson at 9 o’clock ran down an aged farmer by the name of Solomon Parson, a half mile north of Summitville, Monday morning. The accident was witnessed by no one except a small boy who gave the alarm. The engineer says he did not see the man and expressed much surprise when told that his engine had struck and killed a man. When the neighbors gathered at the scene of the accident they found Parsons’ body lying by the side of the track badly mangled. Life was extinct. The deceased was 83 years of age.

I visited the site of the accident, as best I could tell, and wandered through the nearest cemetery but there was no stone for Grandpa Parsons. There were plenty of stones which had been worn clear and lots of plain grass so he may have been laid to rest there. I don’t think I’ll ever know for sure.

Bartholomew Barker is one of the organizers of Living Poetry, a collection of poets and poetry lovers in the Triangle region of North Carolina. Born and raised in Ohio, studied in Chicago, he worked in Connecticut for nearly twenty years before moving to Hillsborough where he makes money as a computer programmer to fund his poetry habit.
View all posts by Bartholomew Barker →
This entry was posted in Dead Ancestors and tagged parsons, summitville, train. Bookmark the permalink.