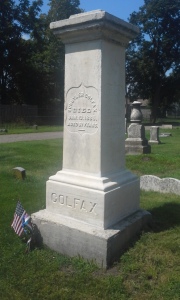 Since I was sort of in the area and the libraries were closed on Sunday I drove up to South Bend to visit the grave of U.S. Vice President Schuyler Colfax who served under Ulysses Grant.

City Cemetery is a lovely old cemetery just west of the center of South Bend. Colfax’s grave is right at the entrance from Colfax Street, of course, but as I drove in, I was focused on finding a shady spot to park the car and thus missed it. That lack of attention made for a more pleasant visit since it was a beautiful summer afternoon for a walk among the tombstones. 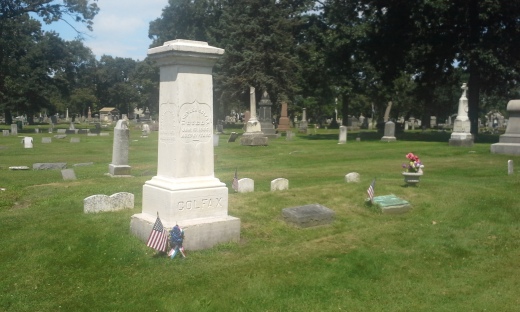 I also found the graves of President William McKinley’s grandparents, who died on the same day, 20 August 1847, which was also their wedding anniversary, according to notes on a cemetery map posted outside the office.

I suppose once I finish my collection, I could start visiting the ancestral graves of the presidents so my affection for wandering through cemeteries doesn’t seem so odd.

Bartholomew Barker is one of the organizers of Living Poetry, a collection of poets and poetry lovers in the Triangle region of North Carolina. Born and raised in Ohio, studied in Chicago, he worked in Connecticut for nearly twenty years before moving to Hillsborough where he makes money as a computer programmer to fund his poetry habit.
View all posts by Bartholomew Barker →
This entry was posted in Dead Presidents and tagged cemetery, colfax, south bend. Bookmark the permalink.