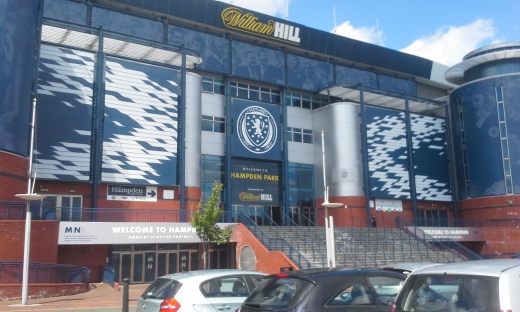 To conclude my trip to Scotland, I visited the national stadium, Hampden Park in Glasgow. They have a lovely museum of Scottish Football in the basement which has lots of fascinating exhibits of the early days of football in Scotland right through to the present day. The museum is the home of the Scottish Cup, the oldest football trophy in the world.

I also took a stadium tour which included the luxurious changing rooms, an indoor training pitch where I successfully kicked a penalty at a blazing 38mph. They also took us out to the pitch through the tunnel that the players use and the tour guide turned on some recorded crowd noise and I will admit to feeling a wee thrill as we emerged into the sunlight this Scottish summer day.

This entry was posted in Scotland 2016 and tagged football, hampden park, Scotland. Bookmark the permalink.