I took the day off from genealogy and instead took the train from Dumfries to Kilmarnock to visit Rugby Park, the home of my beloved Kilmarnock Football Club.

This was my first trip on ScotRail and I was very impressed. The stations conveniently located, the trains were exactly on time, clean and comfortable and the fares quite inexpensive. I wish we had this sort of transportation infrastructure in the States.

Taking the train also meant I could enjoy the lush Scottish countryside as I traveled rather than being focused on the road, white-knuckled driving. I watched quaint stone villages pass by, framed by distant hills and wandering rivers. One reason that Britain is so picturesque is because most of the trees have been cut down so it’s easy to see further. I’d rather keep the trees but the views are a consolation. 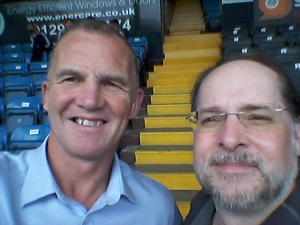 My tour guide of Rugby Park was no less a person than Ray Montgomerie, the former captain. We walked out on the pitch, one of the best artificial pitches I’ve trod upon, it felt much like grass and dirt. I got to observe a first team training session, though I was sworn to secrecy on the tactics. We visited the spacious and comfortable home locker room and the claustrophobic and dingy visitors locker room. Ray told me some horror stories of his time in away locker rooms around Scotland.

To tie this in with the rest of my adventures here, I was also shown lots of memorabilia from Killie’s illustrious past. They are the first professional football club and I was shown lots of old photographs and records.

This entry was posted in Scotland 2016 and tagged football, Scotland. Bookmark the permalink.