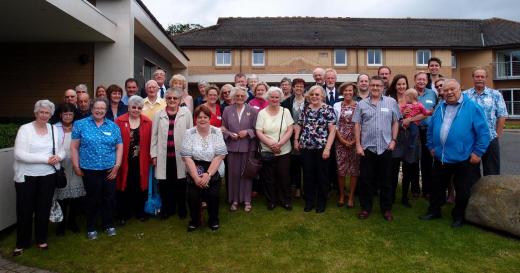 Today was the family reunion that provided the excuse for me to return to Scotland. As we introduced ourselves we also described our connection to the family. I said that my great great great great grandmother was knocked up by a Sorbie. Got a big laugh.

The reunion was organized by Andy Potts and Muriel Sorbie and they gave excellent presentations on Mitchell Sorbie, a soldier who died in the first world war and the efforts to keep his service medals in the family after they appeared on eBay, and the mysterious origins of the Argentinian Sorbies.

We also had a member of the local historical preservation group tell us about what they’re doing to maintain the 17th century cemetery in the nearby town of Stonehouse. He shared some pictures and so once the reunion festivities concluded I took a little walk.

Of course, I got a little lost. I went to the current St. Ninian’s since the really old cemetery isn’t listed on the internet map I consulted. Fortunately, there was a helpful Scotsman nearby who directed me. It was much further than I expected and I ended up putting five miles on my shoes.

But it was worth it! Presiding over the cemetery are the remains of the original church. Just the gable in end survives, like a giant tombstone. The earliest burial there was Alexander Hamilton in 1663. (Obviously that’s not the Alexander Hamilton who appears on the U.S. $10 bill.) Most of the stones that were still legible were from the 19th century some with very interesting engravings.

Overall, it was a great day. I explored a wonderful cemetery and made several new wonderful friends. 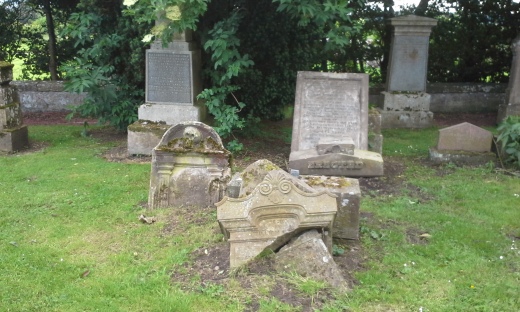 Bartholomew Barker is one of the organizers of Living Poetry, a collection of poets and poetry lovers in the Triangle region of North Carolina. Born and raised in Ohio, studied in Chicago, he worked in Connecticut for nearly twenty years before moving to Hillsborough where he makes money as a computer programmer to fund his poetry habit.
View all posts by Bartholomew Barker →
This entry was posted in Scotland 2016 and tagged genealogy, Scotland, sorbie. Bookmark the permalink.