I’m glad I went back to the ScotlandsPeople Research Centre in the National Archives today because I missed something yesterday. I thought I might have found Mary Milligan’s birth record but I was wrong. According to her tombstone in Hancock County, Ohio, she died at the age of 77 years, 7 months on September 27, 1850. The birth record I thought I found was from 1780, which would be too recent, but this morning I widened my search and found “Mary lawful daughter of Anthony Milligane & Raphael at Balomar[?] Feb. 16 1773” in the Kirkcudbright Old Parish Records. Since I’m American, my foreign geography knowledge is lacking so I had to consult a map and, to my joy, I discovered that Kirkcudbright neighbors Dumfries so I think that’s very probably her birth record and thus I learned my great great great great great grandparents’ names. I was then able to find their marriage record from 1768 and discovered that Mary’s mother was Elizabeth Milligan neé Raphael and I also found Mary’s older sister and younger brother.

To celebrate I thought I’d go find a nice old cemetery to wander on a rainy day. I had read that Old Calton Cemetery was nice and it’s very close to the archives so I walked over only to discover that it was closed until September for repairs. As a backup, I thought I’d visit the old observatory on Calton Hill, which is practically across the street from the cemetery, though elevated by a hundred meters. After a lovely climb/walk to the top with lots of spectacular views, I discovered the observatory was closed for renovation.

Undaunted, I found Greyfriars Kirkyard was open with lots of wonderful stone work on display around the centuries old graves. Greyfriars is also famous for “Greyfriars Bobby” a Skye Terrier who guarded his human’s grave for fourteen years until he too died. The dog’s stone is right at the entrance, not far from a sign that (apparently without irony) indicates dogs are not allowed in the cemetery. 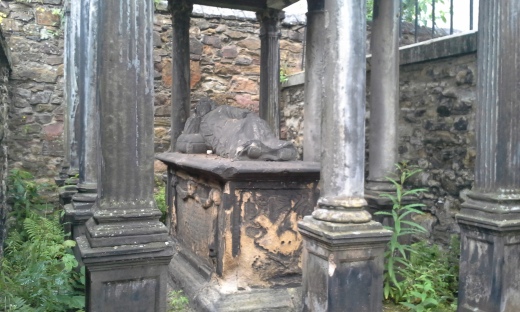 Bartholomew Barker was born and raised in Ohio, studied in Chicago, worked in Connecticut for nearly twenty years before moving to Hillsborough, North Carolina where he makes money as a computer programmer to fund his poetry habit.
View all posts by Bartholomew Barker →
This entry was posted in Scotland 2016 and tagged edinburgh, genealogy, Scotland. Bookmark the permalink.

2 Responses to Edinburgh Closed for Repair