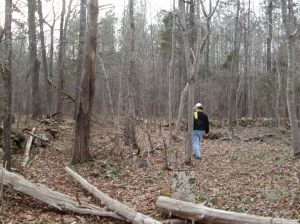 In the latter half of 18th and the early 19th century here in Hillsborough, North Carolina, there was a small Quaker meeting, and like most congregations of the time, the Eno Quaker Meeting had a burial ground. Around the time of the Civil War, a lot of the Quakers left North Carolina for Indiana. That’s why my parents are Hoosiers instead of Tar Heels.

The Eno Quaker Meeting was never very large and soon disbanded. By the time my folks moved down here, the precise location of the burial ground had been lost. My father had been looking for it and while the Quakers still in the area could describe a vague location and the decrepit conditions, he couldn’t actually visit it until now.

Last month someone posted an entry about the Old Eno Quaker Burial Ground to CemeteryCensus.com with the precise latitude and longitude of the cemetery. Taking advantage of a brief thaw this southern winter, Dad and I took a walk through the woods. He was the first to spot the stone wall and soon enough we were wandering among fallen trees, saplings and gravestones rubbed clean by wind and rain. 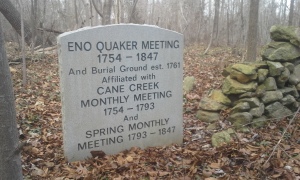 Of course, the cemetery hadn’t been truly forgotten, just abandoned. We found this stone erected by local Quakers just four years ago which included some genealogical information. Very few of the original stones were still legible.

While we were there, three more people found the cemetery from the opposite direction. There’s a new housing development being built to the west and the cemetery will be next to their perimeter walking trail. Maybe this summer we’ll get in there and clear away some of the rotting trunks and dead brush that currently litters the graveyard. 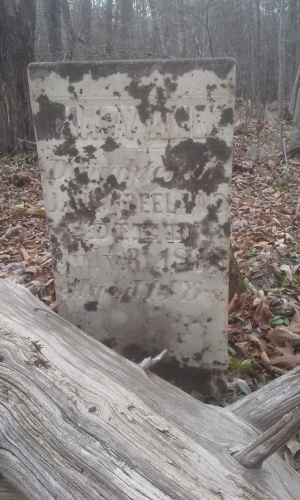 It brings me solace to see how quickly the trees can reclaim space once the humans leave.

Bartholomew Barker was born and raised in Ohio, studied in Chicago, worked in Connecticut for nearly twenty years before moving to Hillsborough, North Carolina where he makes money as a computer programmer to fund his poetry habit.
View all posts by Bartholomew Barker →
This entry was posted in Ephemera and tagged cemetery, Hillsborough, quaker. Bookmark the permalink.