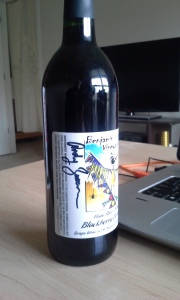 I remember the first time I met Andy Zeman, owner and vintner at Benjamin Vineyards & Winery, in the Saxapahaw Farmers’ Market not long after I moved to North Carolina in 2007. I told him that I enjoyed sweet red wines. He let me taste their Hunt wine, from the Muscadine grape. It wasn’t cloying like some Muscadine wines can be nor did it excite me. Then he introduced me to their Blackberry Bramble and I was in love.

For a couple of years, usually in late autumn, I would drive over to the vineyard and buy a case of Blackberry Bramble which would last most the year. Then I started taking friends and fellow poets for tastings there. They had a lovely establishment with a broad porch overlooking the vines. Regardless of the season, it was a delightful destination for a weekend drive.

But, as is my tendency with those I love, I took Blackberry Bramble for granted. It has been a few years since I last had a bottle. I’ve found other wines that, while not as good, are more convenient. Then Tara Lynne Groth, while looking for a venue in which we could hold a poetry workshop, discovered they were closing. While the vineyard will remain and they will still make wine, they will be closing the tasting room just before Christmas and will no longer sell directly to the public. So, I took my final drive to the vineyard, along the Haw River, on two lane roads through muted autumn color.

This entry was posted in Ephemera and tagged blackberry bramble, saxapahaw, vineyard, wine. Bookmark the permalink.