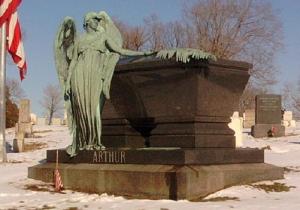 The stories recorded in these pages almost always end at the grave site. However, on this journey the adventure began after I left Chester Arthur’s tomb in Albany Rural Cemetery.

Finding the grave was relatively straightforward. Directions provided by the visitors’ center were adequate though not quite precise enough. The desk clerk of a convenient motel had never heard of the cemetery but he had a detailed map as did the cemetery itself once I crossed that threshold.

I wrote this in a hotel room in downtown Syracuse, New York. Chester A. Arthur was not the destination of this journey, his grave was merely a way point. This weekend I took a self-declared holiday to celebrate the change of season, despite the fact that there was a new inch of snow on the ground. The vernal equinox and the full moon occurred within a few hours of each other that weekend and it was my good fortune to learn that my favorite opera was being performed in Syracuse that same day.

All this I planned out months before, a personality defect of iNTj‘s like myself. What I didn’t expect was to discover, as I entered the hotel lobby, that they were having a huge party to celebrate not spring, but St. Patrick’s Day and the NCAA basketball tournament.

Believe it or not, I did check before I ordered my ticket and made my reservation to see if the Carrier Dome was hosting any tournament games that weekend. They weren’t, though they would the following week. I figured there wouldn’t be any problem.

And for much of the population discovering an unexpected and free party in their hotel would not be a problem. For me, however, it was. Large, loud groups of happy people have always intimidated me, another defect of my iNTj personality.

None-the-less, writing this in a relatively quiet hotel room, listening to Puccini on my laptop’s inadequate speaker, anticipating hearing the same music in a matinee performance the following day, all factored into a wonderful contentment of my being. I was and am doing what I love to do.

Just a comment on Arthur’s grave: I remember visiting it during the summer of 1981 and thinking that it was the most disproportionately ostentatious Presidential grave I’d ever seen. That opinion stands. I think it’s the great verdigris statue that puts me off.

Bartholomew Barker is one of the organizers of Living Poetry, a collection of poets and poetry lovers in the Triangle region of North Carolina. Born and raised in Ohio, studied in Chicago, he worked in Connecticut for nearly twenty years before moving to Hillsborough where he makes money as a computer programmer to fund his poetry habit.
View all posts by Bartholomew Barker →
This entry was posted in Dead Presidents and tagged Albany, Albany Rural Cemetery, Chester A. Arthur. Bookmark the permalink.