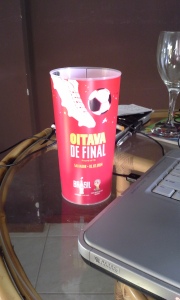 As my month in Brazil winds down here are some facts which I find interested but maybe that’s just because they’re about me and the World Cup matches I’ve been to over the past twenty years.

I have attended 19 matches, 15 group stage, two round of 16 and two quarterfinals, including last night’s which was also the only time I’ve witnessed a penalty shootout. My very first World Cup match was my other quarterfinal between Italy-Spain in Foxboro, Massachusetts in 1994.

(Linguistic note on the “Round of 16”: I’ve never liked that term since the other rounds are all “something-finals”. In Brazil they call it “Oitava de Final” or “Eighthfinal” which I like saying but looks really odd with those five consonants cluttering the middle. How about from now on we just call it a “semiquarterfinal”?)

The team I have seen the most is the Netherlands, three times and they’ve won twice and drawn once. The draw was last night but since they advanced to the semifinals one would be justified in calling it a victory, though it was far from a Costa Rican loss.

There are five other nations I’ve seen twice: Belgium two wins, Sweden a win and a draw, Croatia and Portugal both a win and a loss and Spain two losses!

Twice I’ve been to seven goal games, France 5-2 over the Swiss this year and Portugal’s 7-0 demolition of North Korea four years ago. I’ve also had two matches without a goal, last night’s thriller (not ironic) and England-Algeria in Cape Town, South Africa which was anything but a thrilling.

While I loved my time in Berlin in 2006, there were only three goals scored in the three games I attended, all 1-0 victories but I can’t remember much of anything about them. Here in Salvador I saw 24 goals in six games, by far the largest goals per game in my experience.

Bartholomew Barker is one of the organizers of Living Poetry, a collection of poets and poetry lovers in the Triangle region of North Carolina. Born and raised in Ohio, studied in Chicago, he worked in Connecticut for nearly twenty years before moving to Hillsborough where he makes money as a computer programmer to fund his poetry habit.
View all posts by Bartholomew Barker →
This entry was posted in Brazil 2014 and tagged brazil, world cup. Bookmark the permalink.

6 Responses to Statistics, because America!