This evening I went out with Domenico and friends to watch the Brazil quarterfinal at Passione Italiana. For some reason the restaurant only opened after the match finished but we were allowed in early to watch with the staff. Brazil got just what they needed, an early goal to relieve the pressure and they were able to hold off Columbia to advance to a semifinal match against Germany. Everyone was very happy until the news broke that Neymar fractured a vertebrate and was out for the rest of the tournament. 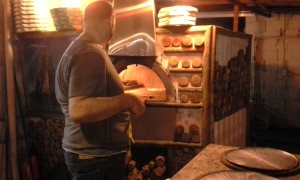 After the match, Domenico had me come back to the kitchen to see the wood fired pizza oven and watch our pizzas being made. He also confided the Italian secret of pizza making which I may not reveal. We all know how seriously Italians keep secrets. 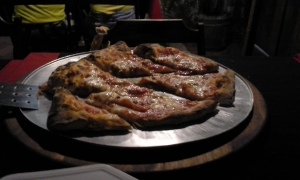 The pizzas at Passione Italiana are the best I’ve had, even better than those I ate in Rome and now I know why but don’t expect me to replicate it in North Carolina. Confiding cooking secrets to me is like confiding bicycling secrets to a fish.

The streets of Salvador are packed with revelers tonight especially down here in Barra near the Fan Fest. Things are starting to quiet down a little as we pass midnight but even if I hadn’t watched the match, I’d know Brazil had won.

Bartholomew Barker is one of the organizers of Living Poetry, a collection of poets and poetry lovers in the Triangle region of North Carolina. Born and raised in Ohio, studied in Chicago, he worked in Connecticut for nearly twenty years before moving to Hillsborough where he makes money as a computer programmer to fund his poetry habit.
View all posts by Bartholomew Barker →
This entry was posted in Brazil 2014 and tagged brazil, pizza, salvador da bahia, world cup. Bookmark the permalink.

1 Response to Brazil and Pizza