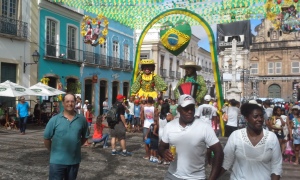 Today I visited the Pelourinho, the historic and tourist section of Salvador, with my lovely native guide, Tamara. Coincidentally it was also the celebration of Bahian independence so streets were closed to vehicles and packed with pedestrians.

While independence came in 1823, Salvador was founded in 1549, sixty years before Jamestown, Virginia, and it was the capital of Brazil until 1763. Its age is one of the reasons I chose to spend my World Cup in Salvador rather than Rio though I will admit, I have not done as much historic touring as I expected. 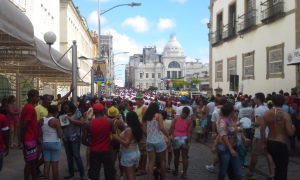 The festival was typical of street festivals all over the world. The music was more samba-ey here and there were folks dressed as colonial Portuguese and natives in elaborate headdresses wandering around but there’s really not much of a story.

Since both Tamara and I enjoy moqueca we had lunch and dinner in one meal at Maria Mata Mouro which is housed in a seventeenth century building across the street from one of the many old churches. The moqueca was delightful with shrimp, squid and lots of fishy goodness. 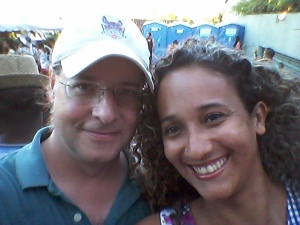 This entry was posted in Brazil 2014 and tagged brazil, pelourinho, salvador da bahia. Bookmark the permalink.