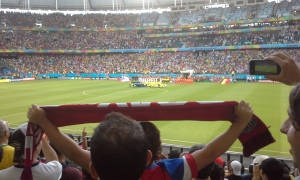 Apologies for the late post. I just got off the phone with Jessica, the beautiful young lady whom I have been indoctrinating into the joys and sorrows of football. She has accompanied me to a couple of RailHawks matches and she’s been watching the World Cup since I’ve been here in Brazil. Tonight we needed to talk through the Americans being eliminated in a wonderful match. Besides, I miss her.

This afternoon, I had to balance my desire to get to Arena Fonte Nova early with the fact that Argentina and Switzerland were playing. I watched the regulation 90 minutes and thought they looked so exhausted that they were just going to go to penalties so I hopped on the bus instead of watching extra time. Once I got to the stadium, I ran into a guy in an Argentina shirt and asked in my poor Portuguese what happened. Fortunately, he was Australian and told me about the late winning goal. 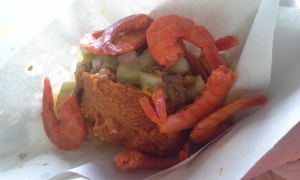 Before I actually entered the stadium, I had my first acaraje. It’s a deep fried ball of mashed black-eyed peas cut in half and served with shrimp and various sauteed veggies shoved inside. It sounds better than it tastes. The lady who sold me the acaraje even asked if I wanted it spicy to which I gave an enthusiastic affirmative, but it was rather bland. I think I’ll stick with the moqueca and feijoada.

The crowd in Salvador has a special affection for the United States. One of the two major football clubs here, Esporte Clube Bahia, the one who plays their home matches at Arena Fonte Nova, wears the colors red, white and blue so they have adopted the USA much like I have adopted Holland since they wear orange just like the RailHawks. When you heard the crowd chanting “U.S.A. U.S.A.” a large portion of those voices were Brazilian. 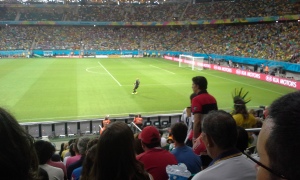 Before the World Cup kicked off, I doubted that the United States would get out of their group, but they did and I was delighted to finally get a chance to see them play in person. They did not disappoint. In none of their four matches here have they played particularly well but always just enough to keep things exciting. This particular match was all Tim Howard. With a lesser goalkeeper between the sticks, it would have been over by halftime.

After Belgium scored their two goals in the first half of extra time, a lot of the locals chose to leave which was a very poor decision. The Americans scored early in the second half of extra time setting up a very tense final ten minutes. I don’t know how it feels to be a player but from the stands I could sense the crowd willing the Americans on to get the equalizer but it was not enough and Belgium advance. 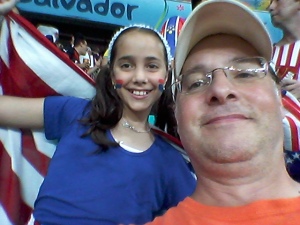 The match was so exhilarating and exhausting that I’m going to need a couple of days away from football. The quarterfinals are set but let’s not play them until Friday and, for my final match in Brazil, Saturday when I’ll see the Netherlands play once again, this time against Costa Rica.

Bartholomew Barker is one of the organizers of Living Poetry, a collection of poets and poetry lovers in the Triangle region of North Carolina. Born and raised in Ohio, studied in Chicago, he worked in Connecticut for nearly twenty years before moving to Hillsborough where he makes money as a computer programmer to fund his poetry habit.
View all posts by Bartholomew Barker →
This entry was posted in Brazil 2014 and tagged belgium, brazil, salvador da bahia, united states, world cup. Bookmark the permalink.

1 Response to Belgium-United States, Round of 16