We’re going to the Zoo

I love waking up to a nice rainy morning. No need to rush to consciousness, just let it happen or not. I had no appointments or expectations so I lazed around until 9am then decided that since the rain was barely more than a drizzle I’d try to walk to the zoo. 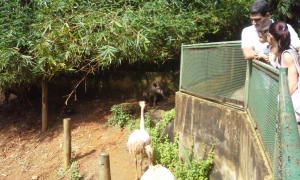 The Jardim Zoologico de Salvador is about 2.5 kilometers to the east along the Atlantic coast. The rain got a little heavier as I walked but I decided to press on. With the temperatures in the high 70s Fahrenheit, it wasn’t uncomfortable. I found the road where I need to turn inland base on a sign and continued walking.

I don’t think I’ve mentioned yet how attractive the sidewalks are in Salvador. When they installed them the used dark and light stones and made lovely patterns that reflect the waves of the ocean. I assume this was done a while ago since a lot of the sidewalks are in serious need of repair but the beauty is still there.

It seemed like I’d been walking too long. That’s usually a good predictor that I’m getting close so I kept expecting to see a sign indicating where to turn in for the zoo but it never appeared. Eventually, I got worried and pulled out my phone for a GPS fix. That was easy enough but with no data access I only could get a vague idea of where I was on the map since it couldn’t download. None the less I could tell I’d gone too far so I turned around.

Salvador needs to work on its signage. On the way back, heading south, there’s an obvious sign for the zoo. Heading north, nothing.

The zoo is free to visit and they house several interesting animals. It seems to be transitioning from the old inhumane cages to more natural appearing habitats but I’m still uncomfortable with zoos.

I love going to zoos to observe my fellow creatures close up. I find it very inspiring and very challenging to view the world through their eyes. I also love all the educational and conservational work zoos do.

Of particular interest to me were some of the animals not in captivity. I saw another marmot in the trees within the zoo and two more outside the zoo running along a power line just like squirrels. There was another species of monkey hanging around the parrot cages during feeding time. (Click on this image and embiggen it to better see the monkeys.) I watched a zookeeper hand what looked like a natural banana, not big and yellow but green and not much larger than a finger, to a beautiful young woman who wanted to feed a monkey. The monkey was appropriately cautious but also fairly aggressive as he grabbed the tasty treat from the girl who screamed.

There were also two species of insects flying around I did not recognize. One was like a butterfly with orange wings except the wings were smaller and shaped more like a dragonfly’s. There was also a lovely iridescent green bug that hovered like a pro and kind of looked like a dragonfly head with no body.

I also don’t think I’ve mentioned how few insects there are around here. My apartment has no screens in it’s windows and I leave the windows open all the time just like everybody else. I’ve only noticed a couple of houseflies and they’ve been around some of the outdoor cafes and definitely no mosquitoes.

As I was leaving a little girl and her mother were coming into the zoo. The little girl looked me up and down and then said “Tourist!” In my best Portuguese, which is still quite poor, I said, “Yes, I’m an American. I speak a little Portuguese.” She beamed a smile up at me and I think her mother said that she was learning English but I had trouble understanding. They moved on and so did I but them the little cried out “Bye-bye!”

Not a bad visit to the zoo. She got to see all sort of animals including a Tourist!

More pictures of the animals are available in my Facebook album.

Bartholomew Barker is one of the organizers of Living Poetry, a collection of poets and poetry lovers in the Triangle region of North Carolina. Born and raised in Ohio, studied in Chicago, he worked in Connecticut for nearly twenty years before moving to Hillsborough where he makes money as a computer programmer to fund his poetry habit.
View all posts by Bartholomew Barker →
This entry was posted in Brazil 2014 and tagged brazil, salvador da bahia, zoo. Bookmark the permalink.