I had an extra ticket for the Switzerland-France match this afternoon so I asked my landlord, Alain, to accompany me since he’d been so nice to take me out the other evening. Before we headed off to the stadium, he took me for a very nice sushi lunch. The salmon was tender delicate.

While we were chatting and dipping sashimi in soy sauce he got a phone call. One of his other tenants just came into another ticket so Alain asked his girlfriend, Rosana, to join us. They had been trying to get tickets to any of the matches in Salvador without luck and Rosana had been very disappointed.

(One of the few bits of Portuguese that I know is that the letter “R” is generally pronounced as an English “H” especially at the beginning of a word. So her name sounds like “Hosannah” not “Rose-anna”.)

With all the last minute changes in the plan were running later than I prefer but we still had plenty of time before kick-off so I wasn’t stressed. We were in the thick of the crowds for most of the trip to the stadium and Alain, being an extroverted guy who speaks four languages well, was stopping and talking with just about everyone.

Since I had the much better pair of seats, Alain gallantly yielded the good seat to Rosana so we were in the 9th row just left of midfield and we arrived just before the players entered the field. She speaks a little more English than I speak Portuguese so we educated each other in football terms and generally boggled at the dominance of the French.

Don’t tell my Francophile friends, but I was rooting for the Swiss because of the guys who helped me get home from the first match but it was not enough, not nearly enough. The French were just stronger and simply muscled the Swiss off the ball.

The Swiss scored on an excellent free kick very late in the match and then got another with time running out. It looked to me like the French got a sixth goal but apparently the referee called time before the ball crossed the line.

In my first three matches, I have seen 17 goals. That’s nearly six per game. My next match is Bosnia-Iran, should there be any gamblers out there who want to ride the trend. 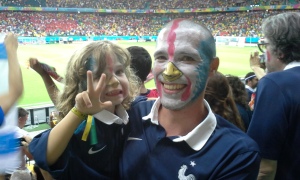 (More photos from the match in my Facebook album.)

Tomorrow’s the solstice, summer for my comrades in the northern hemisphere, winter for me south of the equator. Hope you take advantage the longest day of the year. I’m enjoying the night.

Bartholomew Barker is one of the organizers of Living Poetry, a collection of poets and poetry lovers in the Triangle region of North Carolina. Born and raised in Ohio, studied in Chicago, he worked in Connecticut for nearly twenty years before moving to Hillsborough where he makes money as a computer programmer to fund his poetry habit.
View all posts by Bartholomew Barker →
This entry was posted in Brazil 2014 and tagged brazil, france, salvador da bahia, switzerland, world cup. Bookmark the permalink.