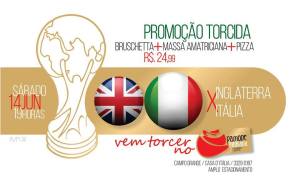 My plan was for a stressless Saturday. I’d just hang out in the apartment and watch the matches, only going out to find food when hungry and I was doing a good job at nothing until Uruguay scored their penalty and coincidentally my phone rang.

My new friend Domenico invited me to dinner at Passione Italiana Restaurante e Pizzaria in the Italian Consulate. He would be working as chef during the England-Italy match, told me his wife would be there with many other friends.

Had the equivalent happened back in North Carolina, I probably would’ve politely declined and enjoyed my hermitage but I am on vacation and once the World Cup is decided probably won’t be back this way again so I accepted. This cause some stress, of course. I would need to trust a taxi driver since it was close but still too far to walk but the more immediate stress was what to wear. It’s getting close to laundry day and I certainly didn’t pack anything that seemed appropriate for a restaurant in a consulate! But Brazilians seem to be reasonably laid back so hoped the best I could, a polo with black jeans, would be good enough.

When it was time, I walked to a taxi stand just down the road and showed a driver the address I’d written on a slip of paper. He indicated no problem and off we went. We spoke little of each others language but we still had a good conversation about football and the results so far. Soon enough he stopped in the middle of a busy intersection in front of a baroque old building that was lit up in green, white and red lights. I gave my driver a nice tip and dodged traffic to go inside.

The restaurant takes the lowest floor and had outdoor seating within the walls surrounding the property. Fortunately, I saw Domenico as I entered and he quickly introduced me to Mauro who lead me to a table with a view of the match. I quickly realized that I needn’t have stressed over my appearance. So I settled in to enjoy the game.

Domenico is an excellent chef. I was able to sample some of the wonderful pizzas he made. The dough was just about perfect, not too thin and crispy but not too thick and chewy. Not even looking at the menu I asked if he had any gnocchi and he prepared a delightful gnocchi with seafood, clams, scallops, oysters, shrimp and one thing I couldn’t identify but it had been alive at some point and was delicious. Sadly, while the seafood tasted fresh, it was not from the Bay of All Saints just a block or two away. Apparently it’s too polluted to produce good seafood.

Domenico’s lovely wife, Vania arrived and so did two Canadian lads who were renting one of his apartments in the building with me. It was nice to have some fellow English speakers at the table and we had a grand time telling stories and learning Portuguese curse words.

At the end of the night or beginning of the morning, Domenico loaded us into his vehicle and delivered us back to the apartments. I’m glad I didn’t decline the invitation politely. Besides I’ve had today to do nothing and so I’ve accomplished just that. Didn’t even go out to get lunch since I was still digesting last night’s feast.

Bartholomew Barker is one of the organizers of Living Poetry, a collection of poets and poetry lovers in the Triangle region of North Carolina. Born and raised in Ohio, studied in Chicago, he worked in Connecticut for nearly twenty years before moving to Hillsborough where he makes money as a computer programmer to fund his poetry habit.
View all posts by Bartholomew Barker →
This entry was posted in Brazil 2014 and tagged brazil, salvador da bahia, world cup. Bookmark the permalink.