Flying South for the World Cup 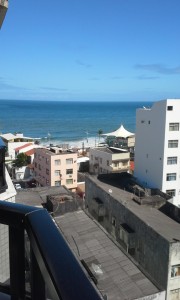 I made it to Miami International Airport with plenty of time to spare, just the way I like it. If I’d planned to cut it close, I would have been very stressed when I was stuck in traffic on my approach but I prefer to kill time in the terminal than to freak out in my car.

The flight south was an uneventful eight hours of dozing. In my bank of three seats, I chose the window and another guy chose the aisle and, much to my surprise, the middle seat was unoccupied. Luxury!

My seat mate and I got talking and I learned that he had lived in Chapel Hill, not far from my current location in North Carolina, a few years ago. Then the guy from the middle seat in the row ahead of us piped up that he lives in Raleigh. We also discovered that all three of us had been in Cape Town for the World Cup four years ago.

I had arranged for transportation from the airport to my apartment for the month and it confirmed my suspicion that airport traffic is universally crazy. However as we exited the Salvador airport, we drove through a tunnel of bamboo that practically glowed green in the morning light.

So here I am, in Brazil, listening to Dave’s Lounge, writing a blog post about my sixth World Cup vacation. The picture was taken from my balcony a few hours. The sun’s already down. A quick downpour just blew through. I’m exhausted but content.

10 Responses to Flying South for the World Cup