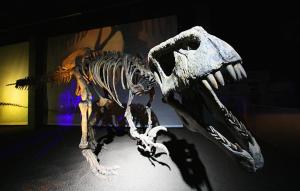 For today’s prompt, write a monster poem. There are the usual suspects: zombies, vampires, werewolves, and mummies. But monsters can take any form and terrorize a variety of victims. So have fun playing around with this one, because we’ve only got a few days of April left.

Bartholomew Barker is one of the organizers of Living Poetry, a collection of poets and poetry lovers in the Triangle region of North Carolina. Born and raised in Ohio, studied in Chicago, he worked in Connecticut for nearly twenty years before moving to Hillsborough where he makes money as a computer programmer to fund his poetry habit.
View all posts by Bartholomew Barker →
This entry was posted in Poetry and tagged birds, dinosaurs, Poem-A-Day. Bookmark the permalink.