On the way back from a long weekend in Quebec, I was making good time on I-91 and thought, “Y’know, I haven’t revisited Pierce’s grave and I have shots left on the camera and I have time…” So, at White River Junction I changed course and headed into New Hampshire. The interstate cuts through the White Mountains and the scenery is stunning. I imagine it would be even more starkly beautiful in the winter, but here in late May, the White Mountains were lush green.

While visiting and revisiting the other graves since starting this site, each one was a carefully planned expedition. Thanks to MapQuest I knew just where to go in most cases to find the cemetery. The challenge was in finding the grave once in the cemetery (which was frequently challenge enough with the Vice Presidents). This adventure was different. This was spur of the moment. “Hey guys! Let’s go find Franklin Pierce’s tomb!” I knew it was in Concord, but beyond that I only had my trusty Rand/McNally road atlas to guide me.

The detail map of Concord had a point of interest labeled “Pierce Manse”. This seemed like as good a place as many to start. I left the highway in the midst of a Memorial Day traffic jam and drove through city streets looking for a helpful sign to point the way more precisely.

How odd, that car is following me.

I find the sign and I’m driving down the side street indicated and so is that car behind me. I drive past an old house whose lawn needs to be mowed and the street abrupty turns. I swing about, thinking that this old house can’t be the place yet must be and I pull in behind the car that had been following me.

An older guy gets out and asks, “Are you looking for the Pierce Mansion?”

We look around this deserted home and all we find is a little sign saying “Open by appointment”. It seems that this gentleman is on his way back home, too, and is a presidential history buff. I explain my “hobby” and he’s one of the few people who hasn’t said, “You’re sick.”

Pierce obviously wasn’t buried here and there was no information available to indicate just where he was buried so I decided to head off to the historical society. I said good bye to my new friend and drove off. On the way, I drove past the state capitol and noticed a big monument to Pierce. Driving too fast, I couldn’t just pull in, so I had to snake my around the capitol, hoping the one way streets were going my way.

There’s a car following me. A familiar car.

We pull into the capitol together and my friend gets out and says that the historical society is closed, but he noticed my car and thought I might know where I was going. No such luck. We examine the Pierce monument, but it doesn’t seem to be his tomb and, again, there’s no information on where his grave is.

I have learned one valuable lesson in these adventures. Elderly people loitering in public places are fonts of knowledge. There was an old guy hanging out on the steps of the New Hampshire capitol and I asked him where Pierce’s grave was. He, of course, knew and directly me along the way. We also asked about the apparently deserted Pierce Mansion and he said that it had been closed for remodeling and they seemed to run out of money. Sad, but typical.

On the way back to the cars, my friend and I talked some more and found more points we had in common. We said our farewells. He headed home, me to the cemetery.

Now, if this were a fairy tale or other fiction he would follow me for a third time. Sorry, this is what really happened. I never saw him again.

I made it to Pierce’s grave with no trouble. It’s near the front of the cemetery, but the directions had me going in through the back. Maybe that’s why I don’t remember my visit seventeen years earlier. 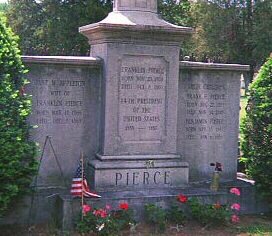 Bartholomew Barker is one of the organizers of Living Poetry, a collection of poets and poetry lovers in the Triangle region of North Carolina. Born and raised in Ohio, studied in Chicago, he worked in Connecticut for nearly twenty years before moving to Hillsborough where he makes money as a computer programmer to fund his poetry habit.
View all posts by Bartholomew Barker →
This entry was posted in Dead Presidents and tagged Franklin Pierce. Bookmark the permalink.