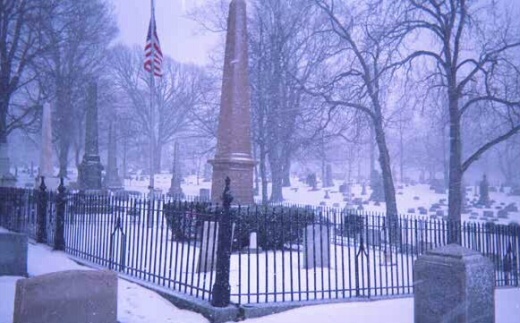 After a wonderful holiday with my family in Ohio, I embarked on the drive back east with several dead presidents in my path. I chose Millard Fillmore mostly because Manus Hand has not yet been there. Before the advent of the world wide web, I thought I was the only one collecting dead presidents. I was horribly wrong. Mr. Hand has visited all but three of them, so I feel a certain rivalry with him. He’s also the reason that I’ve added the vice presidents to my collection.

Childish? Well… It takes one to know one! phbt!

The drive across Ohio was under cold blue skies. It wasn’t until I approached Lake Erie that I noticed the dark clouds in the north. By the time I got to Buffalo I was driving through light snow. It finally felt like winter.

My research told me that Millard Fillmore was buried in Forest Lawn Cemetery. However, I could not determine where in Buffalo that particular cemetery was. So, as I approached the city, I stopped at a small hotel to ask for directions. The lady behind the desk was most indulgent of my peculiarity and after consulting the phone book they gave me a map with the route highlighted.

That route took me right along the lake front and I now have a visceral understanding of the term “lake effect snow”. Looking to my left there was no meaningful distinction between lake and air. It was just one graceful mass of churning gray moisture.

The snow did not abate while I drove through downtown Buffalo. Just inside the entrance to the cemetery I pulled up to a convenient map which clearly indicated where Fillmore’s grave was. Driving through the cemetery was indescribably beautiful.

At the actual grave site I noticed other footprints in the snow. Someone else had been there within the past few hours. Perhaps Mr. Hand and I have competition.

Bartholomew Barker is one of the organizers of Living Poetry, a collection of poets and poetry lovers in the Triangle region of North Carolina. Born and raised in Ohio, studied in Chicago, he worked in Connecticut for nearly twenty years before moving to Hillsborough where he makes money as a computer programmer to fund his poetry habit.
View all posts by Bartholomew Barker →
This entry was posted in Dead Presidents and tagged Buffalo, Millard Fillmore, New York. Bookmark the permalink.