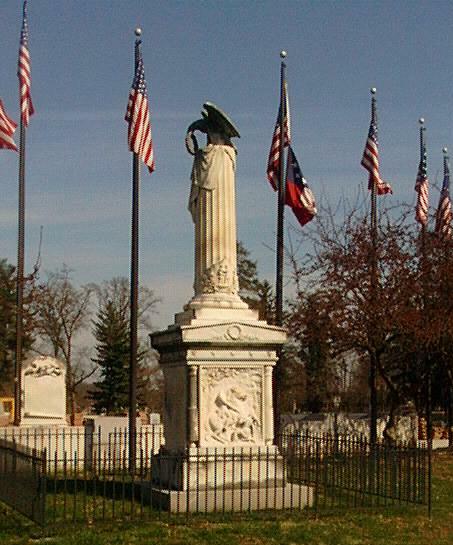 We awoke in Louisville the morning after visiting President Taylor’s grave and headed straight for Frankfort. I timed our visit so that we’d be there during normal working hours since tracking down the Vice Presidents is usually much more challenging than the Presidents. The little inset map of Frankfort in my road atlas had a little red square labeled Kentucky History Ctr. so that was our first stop.

Unfortunately, the Kentucky History Center was closed on Monday. Oh there were people inside, but they wouldn’t acknowledge me trying to get in through the locked doors. My fiancée and our puppy wandered off to explore the cute little historic downtown area while I considered my options.

The little inset map also pointed me to Daniel Boone’s grave, so I considered driving in that direction, hoping to get lucky. Then I noticed a little storefront a block south of the History Center called something like the Kentucky Capital History Center. While it looked like a cheap knock-off, at least they were open.

There wasn’t much going on that Monday morning and they were happy to talk with me or anybody else that stumbled in. And, of course, they knew precisely where Richard Mentor Johnson was buried. No problem.

Sadly, the sign at the cemetery entrance clearly stated that dogs were not allowed, so Ceiba had to stay in the car. She threw a little fit when I got out since she loves the bluegrass. It’s tough being a spoiled puppy.

All the other signs in the cemetery pointed to Daniel Boone’s grave. Even if I hadn’t found anyone to ask, my backup plan would’ve taken me straight to my destination. Boone is buried nearby, but in a far superior location. His grave overlooks the state capitol with the Kentucky River Palisades in between.

There were some Californians just ahead of me taking pictures of Boone’s grave. I told them there was a dead vice president not far away. They weren’t interested.

Bartholomew Barker is one of the organizers of Living Poetry, a collection of poets and poetry lovers in the Triangle region of North Carolina. Born and raised in Ohio, studied in Chicago, he worked in Connecticut for nearly twenty years before moving to Hillsborough where he makes money as a computer programmer to fund his poetry habit.
View all posts by Bartholomew Barker →
This entry was posted in Dead Presidents and tagged Daniel Boone, Kentucky, Richard Mentor Johnson. Bookmark the permalink.