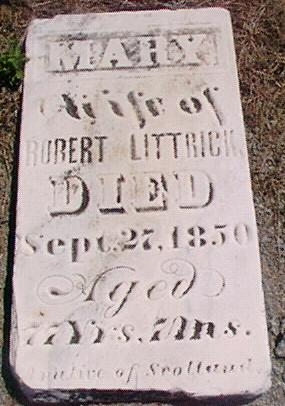 When I visited the Littrick family plot in Cannonsburg cemetery back in the summer of 2000, I found this gravestone lying on the ground not far from my grandmother’s grandfather’s father. Since she was obviously family, I took a picture and posted it.

Now, thanks to the internet, I know that Mary Littrick, née Milligan, is William Littrick’s mother. Some very distant cousins from England found me and told me her story.

Mary Milligan was born in Shawhead, a little village in Dumfriesshire, Scotland. When she was thirty-five years old, she had an illegitimate son with a man named John Sorbie. That boy, Joseph Sorbie, was the link that lead my Scottish cousins to me.

A few years later, Mary married Robert Littrick in Dumfries and in 1814 she gave birth to William Littrick, through whom I am descended.

At some point, Robert Littrick dies. I have heard rumors that he was buried in same graveyard as the great poet Robert Burns. Unfortunately that has not been confirmed yet. It would be ironic if it were true because during a trip to Scotland in 1999, I visited Robert Burn’s grave in Dumfries.

Around 1834 Joseph Sorbie leaves Scotland and settles in Hancock County, Ohio. I don’t know when Mary and her son William came to America, but it was certainly before 1845 when William married Gudith Arnold in Indiana.

In the 1850 census, Mary Littrick is living in Hancock County living with Catherine Barnet, a 59 year old woman from Pennsylvania and Binal Baker (I may be misreading the census taker’s handwriting for the first name), a 73 year old man from Ohio. I still can’t explain Mr. Baker’s presence in the household, but Catherine Barnet was Joseph Sorbie’s mother-in-law!

Mary Littrick died a few months after the census taker visited. Based on the above information, I imagine she was a proud, independent Scottish woman. But what happened during the first thirty-seven years of her life? In the late eighteenth-early nineteenth century, that was a full lifetime. Then having two sons by two different men in her mid thirties-early forties followed by immigrating to the United States possibly in her sixties seems extraordinary. She seems to have started a tradition. Her grandson, Robert Burns Littrick, certainly had an extraordinary life. And his granddaughter is an extraordinary woman. Thanks for the tradition, Grandma.