Hollywood Cemetery boasts two Presidential graves within a few easy spitting distance. The only pair buried closer together are the Presidents Adams.

If you count Jefferson Davis as an American President, and I believe the point is debatable enough that I’ve included his as a bonus grave in my collection, then Richmond, Virginia has three Presidential graves in the same cemetery. The only comparable cemetery is Crown Hill in Indianapolis with three Vice Presidents and one President.

The summer afternoon I visited the cemetery, dragging my parents along for company, was nowhere near as oppressive as it could have been. We drove through downtown Richmond and marveled at all the brick building. It seems like the people inside would be baking like pizzas if it weren’t for air conditioning. Imagine what it was like when this city was the capitol of the Confederacy.

Standing on the steps of President’s Tyler monument, I could share the beautiful view of the James River with his bronze likeness. And behind him, visible in the image below, lies the tomb of James Monroe, caged in cast-iron. 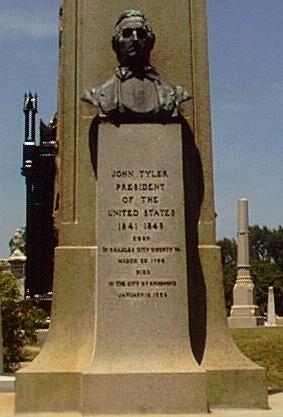