Robert B. Littrick & Abigail A. Nowlan 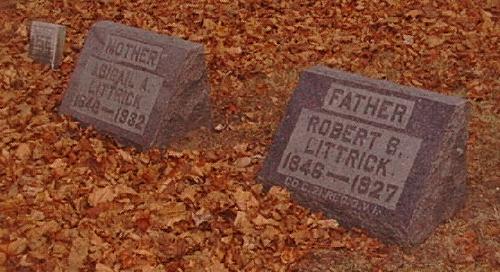 Among the pantheon of my ancestors there are those I know nothing about, those I know little about and those whose stories are so remarkable that I will be telling them to anyone who’ll listen until I join the honored dead.

Robert Burns Littrick was the son of a Scottish immigrant. When he was a teenager he was diagnosed with tuberculosis. He was isolated in his room from the rest of the family and, since there was a war going on, he decided that he’d rather die fighting than be cooped up in a darkened room waiting for death to come. One night he ran off and volunteered for service in the Union army.

Seven years later he returned to Ohio cured and looked up his old sweetheart, Abigail Nowlan. They were married. He became an attorney and he never told anyone what happened to him during those years.

They had five children who lived to become adults and those children had children, as was the custom in those days. Once when his youngest daughter and her children were visiting, he placed a young grandson on his knee and began to tell him the stories from those years of his youth.

What training they gave him before sending him south improved his health. He marched with General Sherman as they cut a swath of destruction through the Confederacy. They tore up the railroads and heated the rails until they glowed orange red and could be twisted around the trees. After the war he signed up to build a railroad heading west. It wasn’t too long before he realized he couldn’t keep up with the physical work involved and he was about to quit when they realized he was the only man on the crew who could read and write. The other men agreed to do his work for him, provided he remain and read their letters from home and write back for them.

For seven years, he did not sleep under a roof. And if he hadn’t felt the need to tell those stories to my great-grand-uncle, they would have been lost in time and for me he would have joined the ranks of the ancestors whose names I know but not their stories.

This entry was posted in Dead Ancestors and tagged Littrick, Marion Indiana. Bookmark the permalink.

1 Response to Robert B. Littrick & Abigail A. Nowlan