Usually these visits are solitary affairs. Me, a lone freak, walking amongst the old moss covered graves then suddenly smiling and pulling out a disposable camera and taking a few shots before sauntering off.

This time, however, one of my oldest friends, his wife, and her brother indulged me during a visit to our nation’s capitol. We were going to a soccer match at RFK Stadium between DC United and the Miami Fusion and Congressional Cemetery is conveniently located just a few blocks away.

We walked through some streets East of the Capitol, past the DC prison and various other tourist traps before arriving at the cemetery. The cemetery is not small, and, since we wanted to get to the stadium before game time, we had a deadline. Fortunately, at the main entrance there was a map with a list of famous people and where they are buried. Gerry was one of them, of course, as well as photographer Matthew Brady and the original resting place of Vice President George Clinton, before his remains were moved to Kingston, New York.

These little maps are wonderful things and they do not inhibit the thrill of the hunt either. It took more than a few minutes of all four of us searching the general area before finding his stone. Along the way we found the tomb of an American Indian Chief, several forgotten Congressmen and some poetry for a deceased wife.

In case you were wondering: Miami defeated DC 3-1. 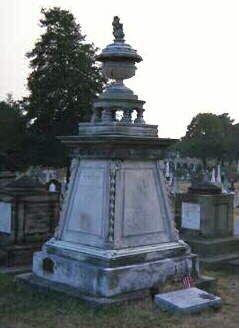 Bartholomew Barker is one of the organizers of Living Poetry, a collection of poets and poetry lovers in the Triangle region of North Carolina. Born and raised in Ohio, studied in Chicago, he worked in Connecticut for nearly twenty years before moving to Hillsborough where he makes money as a computer programmer to fund his poetry habit.
View all posts by Bartholomew Barker →
This entry was posted in Dead Presidents and tagged Congressional Cemetery, Elbridge Gerry, Washington DC. Bookmark the permalink.