The first time I paid my respects at Madison’s grave came at the end of an eventful dead presidential day. I was visiting my parents in Williamsburg and we took a road trip up to Richmond for the two and half dead presidents in Hollywood cemetery. Then I navigated the car up to Montpelier fourteen miles northwest of Richmond. When we got there we discovered that Madison was not buried there, but another hour to the northwest in Montepelier Station. Embarrassed, I begged my parents’ indulgence and off we went.

My parents have always been very indulgent to me in general and this hobby of mine in particular.

We got to Montpelier in time for the last tour of the day. It’s a nicely restored old manor house. They also go into some detail about James and Dolley’s courtship. I found it very interesting, especially considering I was about to become involved with a woman 15 years my junior, much like President Madison did.

Getting to the actual grave site was more involved than we expected. They told us we couldn’t walk so we drove from the welcome center, down a dirt road, over a rickety bridge until we had to stop at a closed gate. The volunteers at Montpelier must have closed it since it was getting late. We’d come this far and I didn’t know when I’d be back this way so my father and I climbed the gate. My mother wisely chose to wait in the car. 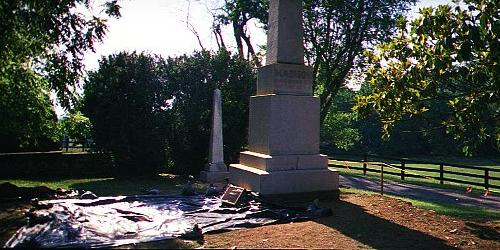 The family cemetery was under renovation. The combination of the bizarre tarp over the grave of the fourth President and the fact that I had to use a disposable camera left me with less than satisfactory images. That’s why the above image did not get posted. 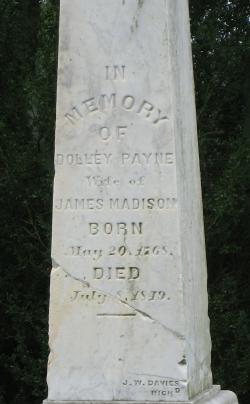 Fast forward seven years. I married the younger woman and for our first anniversary we vacationed in Virginia. I tried to navigate back to the graveyard unassisted. I found the rickety bridge but couldn’t find my way back through the dirt roads. I had to go back to the welcome center and convince them to let me in the back gate without paying admission.

Earlier in this trip, we tried to visit Jefferson’s grave, but the officials insisted that I pay for the privilege and I refused. I hate to pay money to attend a presidential grave.

They did a wonderful job restoring the graveyard. One of Montpelier’s horses even took the time to pose for me near the grave. 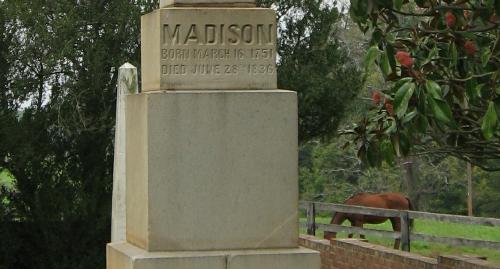 Bartholomew Barker is one of the organizers of Living Poetry, a collection of poets and poetry lovers in the Triangle region of North Carolina. Born and raised in Ohio, studied in Chicago, he worked in Connecticut for nearly twenty years before moving to Hillsborough where he makes money as a computer programmer to fund his poetry habit.
View all posts by Bartholomew Barker →
This entry was posted in Dead Presidents and tagged Dolley Madison, James Madison. Bookmark the permalink.