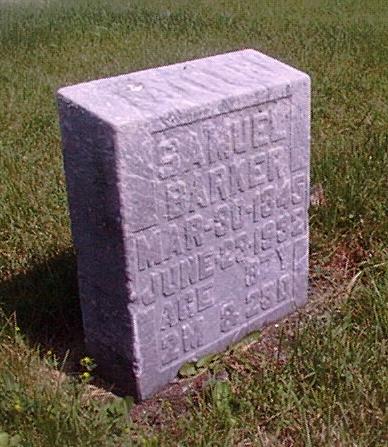 From my father’s side of the family, my favorite stories were those of Grandpa Sammy. For me he became a legendary character from a long tradition of characters. He lived to be 87 years old, had six wives and, as illustrated in the photo on the right, resembled Santa Claus. As a small boy, I remember being fascinated by that photograph which was taken for an article in The Indiana Farmer’s Guide around 1920. I’ve posted the article here in its entirety.

The reason he had so many wives, the story goes, is that he’d go into Indianapolis and let the young city women believe he was a rich gentleman farmer. They’d get married and after they’d spent a little time at the old homestead, they discovered that farming was hard work and divorce him. He was a practical joker, with marriage being his most elaborate gag.

I suppose it’s only fitting that the search for his grave is an amusing story in itself.

My parents and I arrived in Sheridan a little before noon and found the downtown area deserted and dreary. The library did not open until 1:00pm and the historical society was only open Tuesdays and Fridays. Our visit was on a Thursday, of course. So, we stopped an innocent bystander and asked for directions to the local cemetery. Here’s a summary of the conversation:

“We’re looking for the town cemetery.”
“There are two: Crown View and Spencer. Who you lookin’ for?”
“My Great Great Grandfather.”
“What’s the last name?”
“Barker.”
“Oh, Barker.”

And when she pronounced my name, her eyes rolled in that familiar expression of exasperation. We got that a lot in Sheridan. I suppose Sammy and his brothers left a lot descendants in the area. Since Barker is an uncommon name in the rest of the country, this prejudice was entertaining.

We drove out to Crown View Cemetery and had a look around. There were some Barker graves, but not Sammy’s. Next was Spencer Cemetery, which was older and smaller but we could not find any Barkers there at all.

So, off to the library, as it was now past 1:00pm. The librarian was not helpful, except for rolling her eyes when she learned my name. However the library was very helpful. It contained an index of those buried in Crown View with which section they were buried in. Sammy was there, in Section B.

Back at Crown View we scoured Section B, but no sign of Sammy. We started looking in some of the other sections, just in case there was a typo in the index. While doing this, an older man who was in the cemetery for other reasons approached my father and asked who we were looking for. Upon hearing our story (and rolling his eyes when he got the name) he said that he’d go into town and call the lady who was the cemetery’s custodian and if she wasn’t at home he’d come back to tell us. My dad protested that he was being overly kind, but this gentleman insisted and drove off.

A little while later he came back and said that he hadn’t been able to contact the custodian and while we were talking another car pulls up next to us. The man in the car says hello to his friend and hears our sorry tale. After the obligatory rolling of the eyes, he says that he noticed the custodian’s car at the beauty parlor and volunteers to go back there and tell her that we needed some help locating a grave.

As you may have guessed, Sheridan is a very small town in which everyone is extremely helpful and knows everyone else’s business.

It wasn’t long before he returned and said that the custodian would be out as soon as she was finished with her appointment. We thanked them both for their enthusiastic help and soon thereafter the custodian arrived and we had a look at the cemetery’s records.

I’ve been in some cemeteries with computer systems. I’ve been to some which use index cards. When I saw the system used by Crown View my heart sank. All they had were huge maps of each section with names penciled into plots over the past century. This was going to be the same search but without the walking.

I was so wrong. Clearly written in the first column of plots was the name “Samuel Barker”.

How could we have missed it? The stone was small and with the sun in just the right position is was hard to read, but those are weak excuses. I don’t know how we missed it, but if we hadn’t, I wouldn’t have had this great story to tell. Maybe it was Sammy’s latest practical joke. 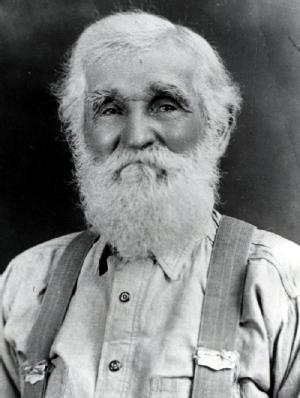 The Guide Has A Twin

Growing up in this southern atmosphere, the young man saw all the curses of slavery and the horribleness of the Civil War in reality as remembered but by very few persons today. In 1865 his father and mother gave up their little home in North Carolina and departed with their family for Indiana where they had relatives. The trip was made by train, they first going to Washington and then taking another train to Indianapolis. This trip was destined to be a sorrowful one, however, for while en route his mother became ill and died.

Upon arriving in Indiana, difficulty was experienced in locating a place to live. So many people had already come from the South that every available house and cabin was inhabited by one or more families. After much searching, a place was found in Hamilton county which was occupied temporarily. About 50 years ago the family built a house about a mile south of Sheridan, and Mr. Barker has resided in it ever since.

The Guide takes pleasure in publishing this picture of Mr. Barker, for he was employed by the progenitors of this paper at two different times. In 1899 and 1900 he sold subscriptions to The Indiana Farmer over an extensive territory in Hamilton and surrounding counties. Then later, 1909, he became a subscription agent for The Farmer’s Guide, covering much the same territory that he had before. It was necessary for him to give up this work in about a year because of the ill health of his wife. He was a subscriber to The Indiana Farmer and The Farmer’s Guide long before their combination in 1917, and since then has been an ever loyal booster and support of The Indiana Farmer’s Guide.

Mr. Barker always has been prominent in his community and once was director of the annual Ex-North Carolina People’s Reunion held at Warren, in Huntington county, for many years. He has been a successful farmer and live-stock producer and still has some sheep out on the shares. Bright in the mind, he remains as one of those few individuals who to-day can remember happenings about which most of us have been informed only through history books. —L.P.E.

This entry was posted in Dead Ancestors. Bookmark the permalink.